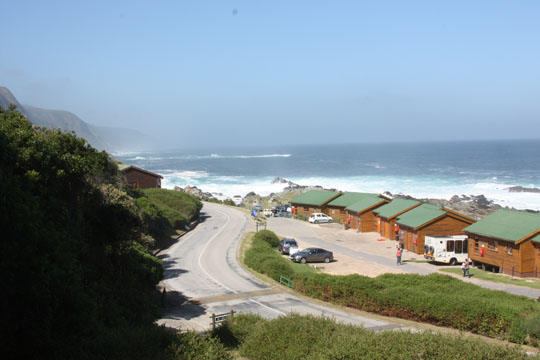 I took a few days away from blogging to compete in the New Jersey Audubon’s World Series of Birding.  My team finished a respectable 25th in a field of almost 60 birding teams and, most importantly, had a great time.    Now, though, I would like to return you to our African Adventure.

Our next stop was Tsitsikamma National Park, a stunning coastal park found on South Africa’s Garden Route .  We arrived in the early afternoon and, lottery style, picked our room keys out of a brown paper bag.  This was the view we enjoyed from our cabin!

The coast at Tsitsikamma was very rugged and consisted primarilyof large rock outcrops.  This created some spectacular waves, as the Indian Ocean battered against the coast.  If you look closely, you can see two people exploring on the rocks – gives you a sense of how large the waves are that came crashing against the shore.

This was the view as we relaxed and enjoyed a few drinks at an outdoor bar.  We hoped to take a boat ride up the river, but rides were canceled due to troubles with the boat’s engine.  So, we sat and enjoyed the view.

The next morning we were surprised to find baboons walking around our cabin.  They were exploring garbage cans, trying to break into cars, and generally making a nuisance of themselves.  A group of rangers came along in a truck and attempted to run the baboon back into the woods, with only limited success.  This young fellow watched the fun from a safe perch.

Later than morning we took a hike to the river’s mouth.  We had heard that there were suspension bridges that gave amazing views of the river and ocean.  This was our first view as the trail emerged from the bush.

There were three bridges all together, suspended across the river and along the rocky shore.  We spent an hour or so exploring and hiking along the shore before heading back to our cabin.

We encountered this fellow on our way back through the bush.  This is a Rock Hydrax, a close cousin to the elephant.  These little fellows were usually found in large packs, appeared to be very social with each other, and would stare (unblinking) at us as we walked by.

After our morning hike, a group of us headed out for some lunch and shopping.  We picked a small outdoor cafe and enjoyed our first taste of ginger beer.  This homemade drink was cold and refreshing – really hit the spot.  We wandered from shop to shop and eventually ended up back at our cabin, tired and happy from our wonderful day at Tsitsikamma.